Who is Glenn Grant?

I’m a writer, editor, and illustrator. My short stories have recently been collected in Burning Days, published by Nanopress in 2011. My fiction has also appeared in Year’s Best SF 10, Interzone, Northern Stars, ArrowDreams, Island Dreams, and (in French) in Solaris. In collaboration with Tor senior editor David G. Hartwell, I edited Northern Stars: The Anthology of Canadian Science Fiction and a second volume, Northern Suns. I used to write the science fiction book review column for The Montreal Gazette, and I’ve also reviewed for such periodicals as Science Fiction Eye, The New York Review of Science Fiction, Science Fiction Studies, and bOING bOING.

My 1990 article on memes, “A Memetic Lexicon,” has spread virally, appearing in dozens of magazines and websites, and has been translated into German, Spanish, French, Arabic, and Polish.

Way back in the day, I edited and published three issues of Edge Detector: A Magazine of Speculative Fiction, and was a founder and contributor to the underground comics magazine Mind Theatre.

My illustrations have appeared in numerous books from Steve Jackson Games.

I’ve been nominated twice for the Aurora Award, for my editing and for my illustrations.

Born in London, Ontario, I’ve lived in Montréal since 1989. 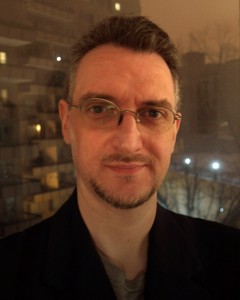 One Response to About

This site uses Akismet to reduce spam. Learn how your comment data is processed.